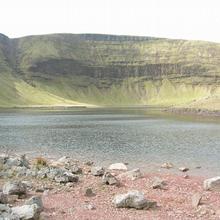 Highly acidic soils have developed over the Millstone Grit and Coal Measures rocks which occur along the southern edges of the Geopark. These soils encourage the growth of such plants as sphagnum moss, sedge, saxifrage and cowberry. The better drained soils in these areas tend to be covered with ling, heather and bilberry.

Over the Carboniferous Limestone, a distinct suite of soils has developed supporting a different community of plants.  The range of species is also controlled closely by the amount of grazing by sheep and other factors such as altitude.

The Old Red Sandstone produces neutral or acid soils in which such plants as harebell and tormentil thrive.

Soil temperatures vary with altitude and this affects the distribution of annual, biennial and perennial plant species.  Annual and biennial species are generally less tolerant of extreme conditions and are found below 300m.  A high proportion of perennial species which are better adapted for survival in extreme conditions are recorded above 300m.