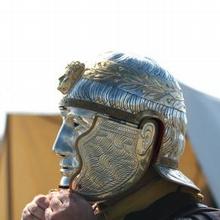 When the Romans arrived in mid Wales they had the local tribes to contend with – the Silures to the south and the Ordovices to the north.  It was to be nearly two millennia before these tribes rose to global fame as they gave their names to two great periods of geological history – the Ordovician and the Silurian.

The Fforest Fawr Geopark area was inhabited by the Silures – a Celtic tribe described in the history recorded by General Tacitus, Julius Agricola, the son in law of the Emperor Claudius.  He had been assigned the task of pacifying the inhabitants of Wales and Scotland and was successful in defeating the Silures in AD70.

The Roman occupation coincided with the improved climate which began in the later Iron Age.  The generally warmer weather gave a new lease of life to farming in upland areas, including the cultivation of cereals.

Archaeologists have surveyed two Roman marching camps at Y Pigwn constructed on the crest of Mynydd Bach Trecastell (OS grid ref: SN 827312).  One camp is actually superimposed on the other.  A third much larger camp was constructed to the south on Mynydd y Llan at Arhosfa Garreg Llwyd (OS grid ref: SN 802262).  These lowland camps were constructed during summer campaigns by Roman legionaries and auxiliaries.  They consisted of an area enclosed by earth and turf banks with a ditch in front and stakes driven into the bank to create a palisade.  The soldiers pitched heavy leather tents within these protective enclosures.

Following the conquest of Wales by the late AD70’s a network of more permanent forts was linked by a network of engineered all-weather roads.  One example is the road which linked the major five acre fort of Y Gaer to the west of Brecon (OS grid ref: SO 003297) (occupied until about 300AD) with the fort at Llandovery.  Brecon Gaer was at the centre of a network of Roman roads radiating out to Gobannivn (Abergavenny) and Magnis (Kenchester) in the east, Alabvm (Llandovery) and Maridvnvm Demetarvm (Carmarthen) in the west, Castell Collen (nr Llandrindod) to the north and Nidvm (Neath) and Cardiff in the south.

In common with many Roman roads in Wales, the road to Nidvm is known as Sarn Helen.  It cuts through the midst of the Geopark as it crosses Mynydd Illtud, skirts Fan Frynych and enters Cwm Llia.  Crossing the Nedd Fechan it passes Coed y Rhaiadr on its way to Banwen on the southern edge of the Geopark.  Most of the route can still be followed on foot, mountain-bike or horseback.

Maen Madoc at SN 918157 is a 3m high memorial stone beside Sarn Helen in Coed y Rhaiadr north of Ystradfellte.  It is believed to be either late or post-Roman in origin.

The Romans are known to have mined gold at Dolaucothi some miles to the northwest of the Geopark.  The site is now in the care of the National Trust. The extent of Roman economic activity within the Geopark which may have included mining for minerals and building stone is not known.