There was a major conference hosted by the Geopark in Brecon in the Autumn of 2014 focussing on recent developments in our understanding of the thick pile of Devonian and late Silurian sediments deposited in the middle Palaeozoic Anglo-Welsh basin.

A symposium on the latest work on the ‘southwestern province’ of the British Old Red Sandstone.

The outcrop of the Old Red Sandstone is roughly a right-angled triangle which covers the area from just south of Ironbridge in Staffordshire to east of Shepton Mallet in the Mendip Hills, Combe Martin in Devon and Marloes in Pembrokeshire. The natural geographical centre of this area is probably somewhere like Porth in the Rhondda, but of course there, these rocks lie buried under the South Wales Coalfield. Brecon, however, is pretty central in terms of the outcrop pattern of the Old Red Sandstone. It is natural, therefore, that Fforest Fawr Geopark should host a major conference to stimulate and publish new research into the otherwise poorly known Old Red Sandstone. 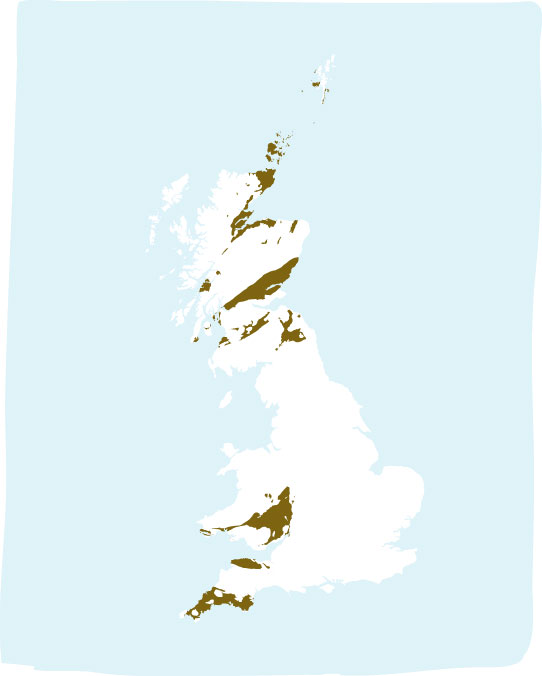 Old Red Sandstone of Britain, and including the marine Devonian of southwest England

To date, the majority of published research material relates to detailed studies carried out in Pembrokeshire. However, the greater part of the outcrop has not been studied in any systematic way. Great sedimentologists such as John Allen and Bryan Williams have been able to interpret the sedimentary patterns of the Old Red Sandstone. The work on vertebrate fossils was carried out by people such as Dineley, and Dianne Edwards has likewise concentrated on the fossil macro-floras. There have also been great studies of the micro-flora of the area. However, we do not yet have an accurate lithostratigraphy which we can use to place these fossil faunas and floras in any sort of time framework.

The aim of the symposium was therefore to bring together as many of the current and past workers on all aspects of Old Red Sandstone studies to stimulate new work and encourage new workers in this field. The conference was also set in a popular tourist destination and intended to stimulate local interest in the geology of the Fforest Fawr Geopark.