At the start of this period of geological history, the lands that would eventually become Wales and England lay within the eastern part of a micro-continent which we call ‘Avalonia’.  It lay far to the south of the Equator, separated by an ocean we call ‘Iapetus’ from a large continent – ‘Laurentia’ – to its north.  Scotland was a part of this more northerly continent along with Greenland and much of North America.

During the Silurian period Eastern Avalonia together with Baltica collided to form a larger continent which we call ‘Laurussia’.

This collision caused a huge range of mountains to be thrown up where the two land-masses docked.  Geologists refer to this period of mountain-building as the ‘Caledonian Orogeny’.  The mountains of modern-day North Wales, the English Lake District and Scotland are but the eroded ‘roots’ of this former mountain chain, now referred to as the ‘Caledonian Mountains’, and which may have reached Himalayan proportions.

Rocks of this age are found in the western area of the Geopark.  They are mostly mudstones, siltstones and sandstones, some of which were deposited in deep water on the continental shelf.  Others were deposited in shallow water as the ripple marks preserved in them suggest. 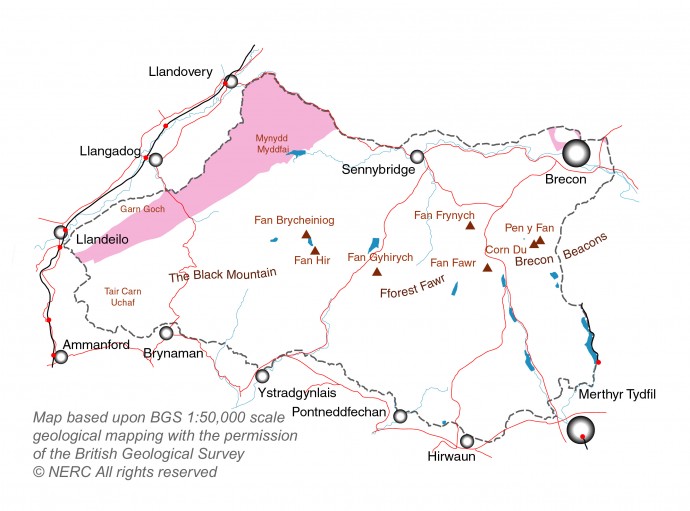 Silurian rocks of the Geopark

The rocky bed of the Sawdde Gorge which is followed by the A4069 Llangadog – Brynaman road offers a good chance to view this succession of rocks which all dip steeply to the southeast in this area.

The name of this geological period comes from that of the Silures tribe whom the conquering Romans found living across much of South Wales.  The name of Llandovery is also known to geologists across the globe as the town has given its name to Silurian rocks of a certain age throughout the world.

this section of the site is still under development – a photo of Blue Quarry in Sawdde gorge, showing ripple marks will appear here