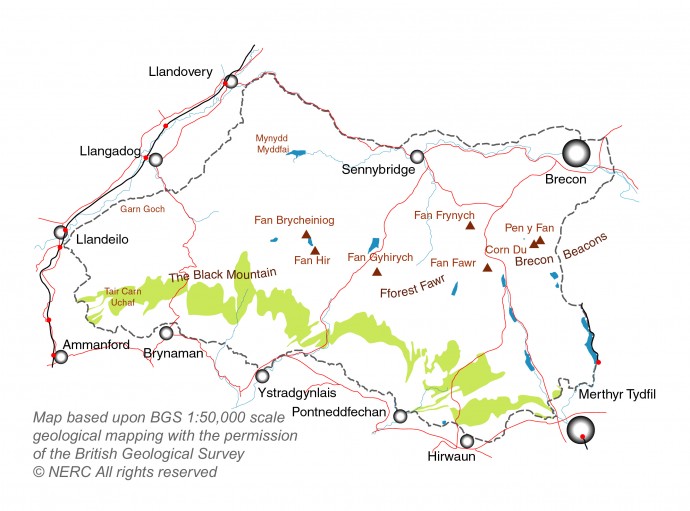 Twrch Sandstone of the Geopark

You will still see older names for these rocks in books and on maps. The Marros Group rocks were formerly known as the Millstone Grit Series, the Twrch Sandstone as the Basal Grit and the Bishopston Mudstone and Telpyn Point Sandstone Formations together as the Shale Group.

The Twrch Sandstone is a hard-wearing sandstone which gives rise to prominent features in the landscape such as Tair Carn Uchaf whilst the rocks of the Bishopston Mudstone and Telpyn Point Sandstone Formations are mudstones and thin sandstones.  The spectacular waterfalls around Ystradfellte were formed where rivers drop off the edges of some of these sandstone layers, wearing away the softer mudstones underneath.

This group of rocks get their name from Marros in south-east Pembrokeshire where they are well-exposed in the coastal cliffs, inclduing Telpyn Point where the upper part of the sequence is revealed.  The Twrch Sandstone is named from the Afon Twrch which, cutting through the Black Mountain, reveals these rock strata where they occur most thickly. Bishopston is a village on Gower where the mudstones are in evidence and the Twelve Foot Sandstone is just that – twelve foot (or about 4m) thick!