The landscape of Wales was largely carved into the shape we see today by a series of ice ages during the last two million years.  Geologists refer to the most recent one as the Devensian Ice Age.  Of all the ice ages it has left the freshest evidence of its passing in the landscape.

Snow falling on the flat tops of the hills was blown by the prevailing winds onto their sheltered northern and eastern slopes where it gradually accumulated.  Turning to ice, it eventually began to move downhill under its own weight as a glacier.  At the height of each ice age, the many small glaciers originating in the highest cwms would merge and flow down the main valleys as broad rivers of ice. The Usk Glacier flowed east over Sennybridge and Brecon and before heading east out of the Geopark via Crickhowell and Abergavenny then south as far as the village of Usk in Monmouthshire.  Ice from the northwestern part of the Geopark flowed southwestwards as the Towy Glacier over Llandovery and Llandeilo towards Carmarthen whilst other glaciers flowed down the Tawe and Neath valleys towards Swansea Bay. 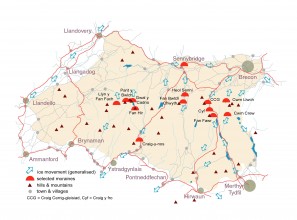 The glaciers left behind a legacy of till (boulder clay) comprising clay, sand, gravel and boulders of the local rocks eroded from beneath them.  Meltwater from the glaciers carved out channels underneath and downstream from them and formed extensive spreads of sand and gravel across valley floors. 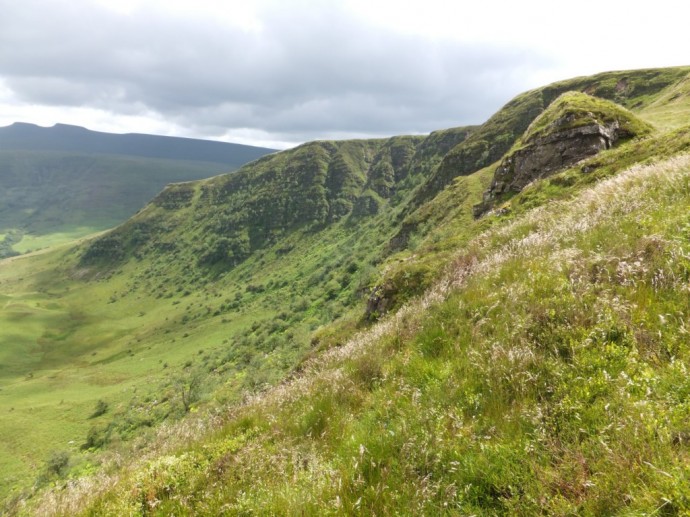 Craig Cerrig-gleisiad – a cwm carved out by a glacier

Geologists refer to the period of time since the last Ice Age as the Holocene, Flandrian or post-glacial.  During this time, rivers such as the Usk and the Towy have cut flood-plains into the glacial debris and deposited alluvium across them.  Peat has accumulated in hollows left in the till as at Traeth Mawr on Mynydd Illtud near Libanus and steeply eroded slopes have collapsed en masse leaving rocky scars on hillsides eg the eastern slopes of Fan Frynych. There’s more on the subject on the ‘Landslide!‘ page.

From time to time new mudflows can be seen scarring steeper slopes of the mountains. These typically involve a few cubic metres of sand and mud and follow particularly heavy rainstorms.  As during the winter of 2008/09, frost action may be responsible for preparing the ground for these sudden collapses.  These are proof that geological processes are not just a thing of the past – geology is still happening around us!

The name of this period belongs to a time in the history of the science when geological time was divided into four great ‘orders’: the Primary, Secondary, Tertiary and Quaternary.  We no longer use the first two terms but ‘Tertiary’ and ‘Quaternary’ are still commonly used.

The geological world is split on the question of when the Quaternary Period started.  Some define it as 1.8 million years ago, others put it at 2.6 million.  It is by far the shortest of all the geological periods but arguably the most important – if only for the fact that we are living in it!

The name ‘Devensian’ comes indirectly from the Roman name for Chester – ‘Dewa’ – for it is Cheshire where especially important deposits and landforms dating from this time have been studied in detail.

And what of the future?

The Earth’s surface has not stopped changing.  The processes that shaped modern Wales continue in the present day and are set to continue for millions if not billions of years into the future. Take a glimpse into the future here!