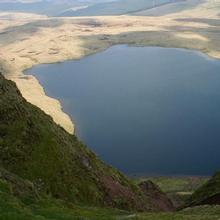 The wild mountains and hidden valleys of the Geopark are the result of nearly 500 million years of Earth history. This fascinating area contains evidence of ancient seas, mountain building and sea level and climate change scattered across a landscape that was shaped by the last Ice Age.

Layer upon layer of rocks form Fforest Fawr UNESCO Global Geopark – the oldest rocks are beneath, the younger ones on top.  Because all of these layers have been tilted to the south, then planed off, we can see a cross-section of them as we travel through the landscape.

It’s also worth remembering that some of the important early work in the development of geology as a science was carried out in this area.  The names of two of the major subdivisions of geological time – the Silurian and Ordovician periods – reflect the pioneering mapping which the 19th century geologists such as Charles Lapworth and Sir Roderick Impey Murchison undertook in the northwest of the Geopark.  They took the names from those of local tribes, the Silures and the Ordovices with whom the Romans vied for control of the territory.