Transport by road, rail and water

Over the last couple of centuries the movement of people and goods has been transformed by a series of transport revolutions. Here in the Geopark just as elsewhere, the canal age and the railway age are well documented by historians. Tramways were a particular feature of the area too. All have left a legacy that can nowadays be enjoyed by visitors to the Geopark.

There are numerous tramways which once threaded their way through the Geopark.  Most were short affairs but others were more ambitious. The longest was the former Brecon Forest Tramroad which ran from the Swansea Valley (Tawe valley) to Sennybridge.

With the exception of the Brecon Mountain Railway, a popular tourist attraction, there are now no railways within the Geopark.  Fifty years ago the Brecon and Neath line still ran west and south from Brecon to the Swansea Valley.  The Brecon & Merthyr Junction Railway ran up the valley of the Taf Fechan and on through Torpantau Tunnel into Glyn Collwn and on to join the line at Talyllyn before heading into Brecon.  It is the southern section of this former railway which now forms a part of the eastern boundary of the Geopark.

A line formerly ran north from Hirwaun to Penderyn – this can now be followed on foot or cycle, forming a part of the National Cycle Network (route 46).  A temporary extension of this line ran north to Ystradfellte Reservoir when it was used to convey building materials for the construction of the dam.

The Monmouth & Brecon Canal was originally constructed as the Brecon & Abergavenny Canal.  Only a short section of it lies within the Geopark – 2 miles between the locks at Groesffordd and the canal’s terminal basin at The Watton in Brecon. 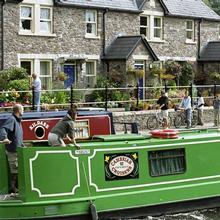 Monmouthshire and Brecon Canal near Brecon

Two further canals approached the area from the south.  Neither the Swansea Canal (which terminated just short of Abercraf) nor the Neath Canal (which ran to Glyn-neath) enter the Geopark, nevertheless they were both key to the industrial development of the area during the nineteenth century.

The modern road system can be thought of as consisting of two east-west routes linked by three north-south routes.

The northerly route, the A40 runs from Brecon to Llandovery via Sennybridge and Trecastle.  The southerly route, the Heads of the Valleys Road connects Merthyr Tydfil with the Vale of Neath.  The Inter Valley Road continues westwards from Glyn-neath to Abercraf in the Towy valley.

Of the three cross-routes the principal one is the A470 trunk road from Brecon to Merthyr Tydfil which crosses the main watershed at Storey Arms at 439m OD.  A spur off this route (A4059) connects with the Heads of the Valleys Road at Hirwaun.  Second in importance is the A4067 between Sennybridge and Abercraf which summits at Bwlch Bryn Rhudd at 369m.  Thirdly the A4069 runs between Llangadog and Brynaman, climbing to a height of 493m at Pen Rhiw-wen.

Each of these routes began life as a turnpike road in the 18th century.

The minor road from Pontneddfechan to Ystradfellte and on up Cwm Llia was constructed as a part of the Swansea to Brecon turnpike.  Its line can be followed further north on foot, cycle or horseback to the west of Fan Frynych to join the modern A4215 north-east of Forest Lodge.

The line of a failed turnpike is followed by a bridleway running north across the Black Mountain from Brynaman to Brest Cwm Lwyd.  Though it is overgrown and poorly drained, its original width can still be discerned as it winds over the moor.