The landscape of over half of the Geopark is formed from rocks of Devonian age when the area lay within the arid interior of the giant continent of Pangaea.

The huge Caledonian Mountain chain which had been formed to the north during the preceding Silurian period was eroded during Devonian times.  Great rivers carried vast quantities of debris southwards across what is now South Wales and deposited these sands and muds here and elsewhere as the ‘Old Red Sandstone’.

This area was uplifted in the middle of the Devonian period – with erosion taking the place of deposition during this time.

A 2-3000’ thick (600-900m) succession of sandstones, mudstones and siltstones was laid down at that time. Flat-lying then, these rock formations now dip gently southwards and form the spectacular scalloped escarpment of the Brecon Beacons, Fforest Fawr and the Black Mountain. 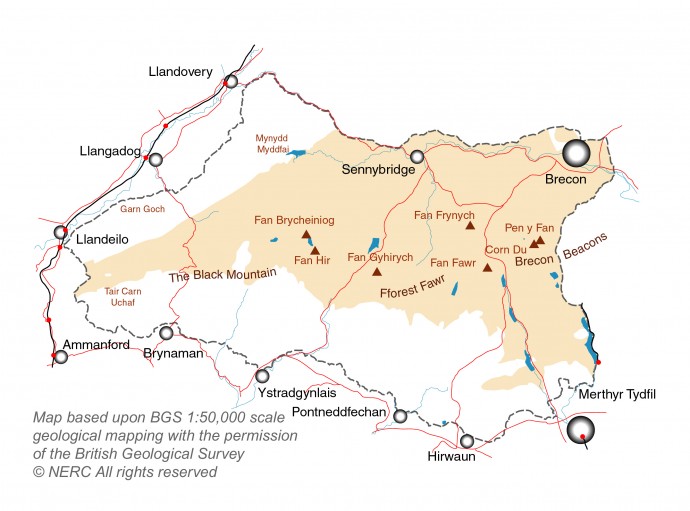 Devonian rocks of the Geopark

Within the Geopark, five formations of Devonian rocks are to be found: the lowermost (and hence oldest) is the thick ‘St Maughans Formation’, on top of which is the ‘Senni Formation’ followed by the ‘Brownstones Formation’.  The Brownstones are in turn topped by the ‘Plateau Beds’ which form the hard capping to mountains such as the Carmarthen Fans, Pen y Fan, Fan Hir and Fan Gyhirych. The ‘Grey Grits’ occur above the Plateau Beds in places.

The first three formations are grouped as the ‘Lower Devonian’ whilst the thinner Plateau Beds and Grey Grits represent the ‘Upper Devonian’.  There is a slight angular unconformity between them which reflects the mid-Devonian uplift of the area and the erosion which took place.

The Devonian period is named from the English county where rocks of this age were first described.

Together with an introduction to the Old Red Sandstone across Britain, the book contains articles on half a dozen specific locations in and around Fforest Fawr Geopark: Sawdde Gorge, Pantymaes Quarry, Heol Senni Quarry, Craig-y-fro Quarry, Afon y Waen & Abercriban Quarries.