The youngest rocks of the Carboniferous period

Westphalian age rocks occur along the southern margin of the Geopark.

Dense swampy forests containing giant horsetails and ferns thrived in the oxygen-rich atmosphere of Westphalian times.  Their fossilised remains can be found in abundance in the coals, mudstones and sandstones which together comprise the South Wales Coal Measures.  They are traditionally divided into three units, of which only the older two (the Lower and Middle Coal Measures) are found within the Geopark.

The base of the Lower Coal Measures in South Wales is defined by the Farewell Rock, a thick sandstone which occurs widely across the coalfield though is in truth several different sandstones all at about the same layer in the rock sequence.  The fanciful name derives from the activities of miners seeking ironstone who, on reaching this level, could bid a farewell to further success as no iron ore lay beneath this layer. Coalminers also came to use the term as it applied equally to coal seams.

The Farewell Rock is shown in green on this map. 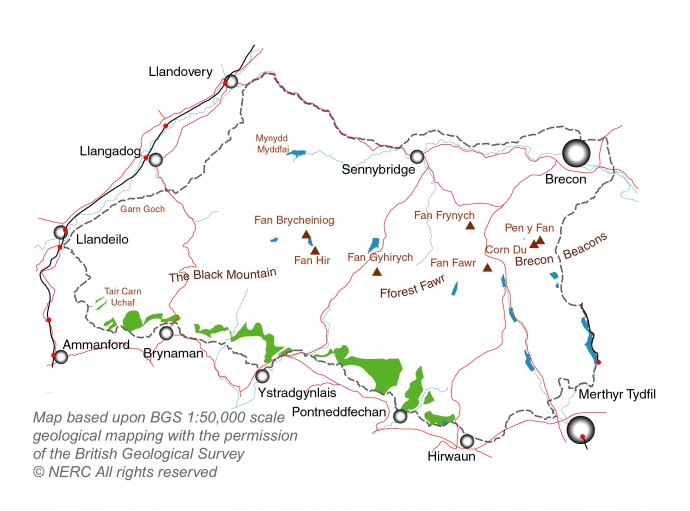 Outcrop of the Farewell Rock in Geopark

Within the Upper Coal Measures it is the Pennant Sandstones which form the imposing north-facing scarp beyond the Geopark’s  southern boundary.   Excellent views over the southern fringe of the Geopark can be enjoyed from its crest.  The car park off the A4061 above the hairpin section is an especially good vantage point.