An extraordinary nineteenth century attempt to make money from these hills. The man behind it over-reached himself but provided us with a lasting legacy.

Stretching from the Upper Swansea Valley in the south to the Usk in the north, this is not so much a single tramway as a network of tramways, some parts of which were never completed.

With care, its course can be followed on the OS 1:25,000 scale map as it enters the Geopark at Coelbren and snakes northwards to Penwyllt then on to Bwlch Bryn-rhudd where it starts its descent via Crai to Sennybridge.

Parts are followed by public footpaths, others by permissive paths and yet other sections run through open access land.  It should be noted that there are still many sections which are not accessible to the public and indeed many which while legally accessible are quite difficult of access due to the waterlogged and tussocky nature of the ground.

The southernmost section was followed by the later Brecon & Neath Railway and this route obliterates parts of the tramway.

From Penwyllt, the main route north is again followed by the railway line though the occasional tighter bend is preserved where the railway had to assume a more flowing curve.

The modern A4067 road follows the line of the tramway for a short while before it can be seen sweeping around to the east, gently dropping down the contours to cross the Nant Gyhirych at the edge of the plantation.

From here northwards the tramway takes a line which in places coincides with the later railway, in places runs roughly parallel to it.  It can be viewed but not generally followed.  Its ultimate terminus is Castell-du Farm at Sennybridge (the farm is private and not open to the public). 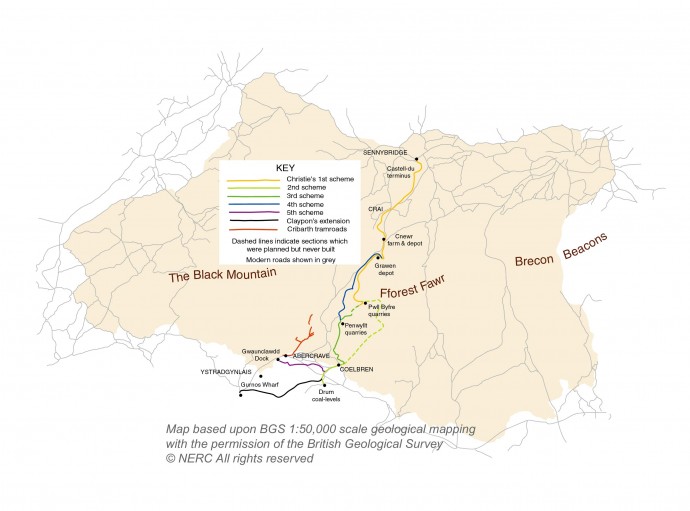 The Brecon Forest Tramroad - click on map to enlarge

An arm of the tramway leaves the main line at its crossing of the Nant Gyhirych and climbs more steeply to the south than the main line skirting the slopes of Fan Gyhirych and passing above Bwlch Bryn-rhudd en route to the limestone quarries near Pwll Byfre.

A short branch also leaves the main line at Penwyllt heading steeply uphill through what is now Ogof Ffynnon Ddu National Nature Reserve to come to a sudden stop at a low limestone bank.  It was intended that this would meet with the line at Pwll Byfre but work ceased before its completion.

Care should be taken not to confuse the Brecon Forest Tramroad(s) with the later tramways which ran between the silica sand pits at Pwll Byfre and the silica brick works at Penwyllt.