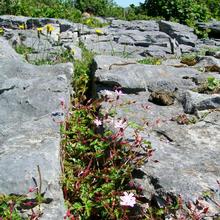 The diverse rocks of the Geopark and the complex development of its landscape have resulted in a wealth of different wildlife habitats.

These range from the exposed plateaux of the Old Red Sandstone hills to the sheltered limestone and mudstone gorges of the south, so often clad in woodland.  Each combination of bedrock, soil and local climate gives rise to habitats with their own unique character.

Meadows and pastures are another aspect of the landscape of Fforest Fawr, their special qualities arising from a complex interplay of man and nature.

Water has played an important part in the evolution of this landscape and remains a focus today, for us as well as wildlife.  The Geopark’s major rivers are especially important, the Usk and most of its tributaries for example being given special protection.

Water has produced numerous cave systems beneath the Geopark which have been explored by cavers for recreation as well as their geological and biological interest.

You may wish to submit your own wildlife observations made within Fforest Fawr UNESCO Global Geopark to the Biodiversity Information Service for Powys and Brecon Beacons National Park which covers the area.  The BIS which is one of four covering all of Wales will be an increasingly important resource relating to the Geopark’s flora and fauna.