Rocks and geology of the Geopark

This landscape has been over 470 million years in the making. The rocks of the Geopark provide evidence of past oceans – now long gone, of barren deserts, of mountains that over eons have risen and fallen and of ancient life – now just fossils entombed in stone.

‘The present is the key to the past.’

from ‘The Founders of Geology’ by Sir Archibald Geikie 1905 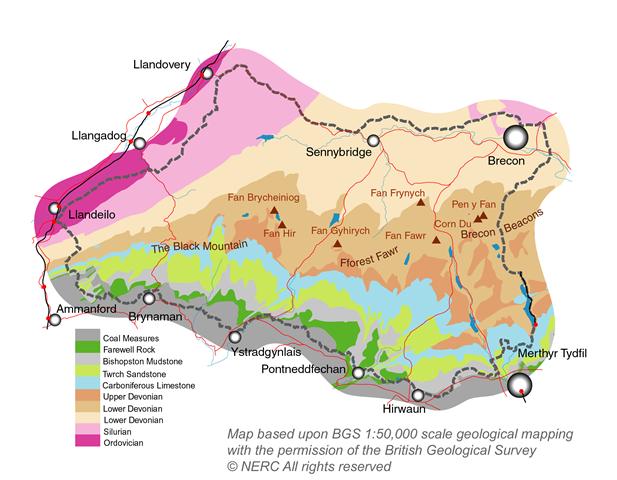 A glance at the geological map reveals a series of bands of colour stretching across the area.  Each band represents a different rock type, formed at different times in geological history.

One such band (purple on our map) reveals where the oldest rocks of the Geopark are to be found – in a belt of country between Llandeilo and Llandovery – they belong to the Ordovician period. Just to their south (pink band) are similar rocks from the Silurian Period underlying places like Mynydd Myddfai and Garn Goch.  These rocks chart the coming and going of seas across central Wales.

The broadest band (browns and beige) which sweeps from one end of the Geopark to the other is that of the ‘Old Red Sandstone’ – mostly of Devonian age – the record of the destruction of a Himalayan-size mountain range which had risen to the north of our area.

Further south a narrower band of limestone (light blue) gives rise to a very special landscape both above and below ground.  It dates from the early Carboniferous Period and tells of shallow tropical seas.  It is in turn overlain by mudstones and the ‘Twrch Sandstone’ (or ‘Millstone Grit’) (light green) – the quartz grains of which were carried here by rivers from the north.

Lastly, along the southern edge of the Geopark, the Coal Measures (dark grey and green) put in an appearance with their mudstones, sandstones and of course coal seams.

All of these layers have been faulted and folded since their formation, often with dramatic effects on the landscape.

Legacy of the Ice Ages

The presence of all of these rock formations alone would be interesting enough but the dramatically changing climate of the last two million years has added another dimension.  Numerous ice ages have resulted in the sculpting of the bedrock by ice, the scouring of valleys by meltwater and the deposition of eroded fragments as moraines.

Taken all together this rich geological legacy makes for a rewarding area to explore whether you’re an expert or have a more casual interest.