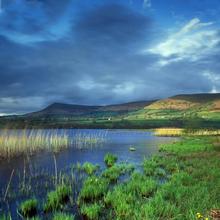 The upland areas of the Geopark are particularly exposed to the wind and indeed to low temperatures.  The prevailing wind direction is from the west though locally winds are funnelled by valleys and passes.

This climate results in a long annual growing season which ranges between 240-320 days though it is shorter in the highest areas of the Geopark.

The soils are moderately wet and indeed sometimes waterlogged.  This fact and the steeply sloping nature of much of the ground makes grazing a better farming prospect than the growing of cereals and other crops.

Climate change brought about by man is expected to have an impact on the area.  Heavier winter rains and more severe storms can be expected to increase erosion of hillside particularly where overgrazing has reduced vegetation cover.  Reduced snowfall and fewer frosts due to milder temperatures during the winter are also expected to have an effect on plant communities.